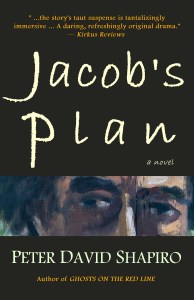 Jacob Morais doesn’t start out as a survivalist. He’s just a normal kind of guy who enjoys his life and wouldn’t change a thing. That is, until a dangerous buffoon takes over the White House.  Foreseeing wide scale disaster, Jacob stores emergency supplies in his basement, buys a gun for self-protection, and acquires fake ID in case he needs to run. Meanwhile day-to-day life goes on. Jacob is recruited to join a start-up that sells jewelry online. The company is growing fast and shows great promise. Or so it seems. When he asks too many questions, he stirs up dangers that are real and that are directed at him personally, quite unlike the collapse of public order for which he prepared. Jacob never served in the military, nor had any kind of training, but now he has no choice; he does what he must to survive.

A man irrationally prepares for some unforeseeable catastrophe and, all of a sudden, that disaster arrives.
xx
Jacob Morais is a self-described “normal kind of guy,” a successful management consultant in Cambridge, Massachusetts. But after a “dangerous buffoon takes over the White House,” he becomes obsessed with preparing for an imminent emergency, though it’s never clear what kind he envisions. He stockpiles supplies in his basement, buys a gun, and establishes a new identity, a manic process humorously described by Shapiro (Portrait of Ignatius Jones, 2014, etc.). He inherits a building in Montreal from his grandfather, and he puts the real estate under his alias and makes it the centerpiece of his “Plan B,” a strategy he devises should parlous circumstances demand it. He becomes so attached to his plan, he allows it to undermine his romance with Annie Kane, a fine arts professor. Jacob is hired to join Dazzle, a “hot start-up,” by the company’s new CEO, Sophie Bronstein, an old high school friend, who is coincidentally friends with Annie. The company is riven by intramural dispute, mostly stirred by the brashly disagreeable Viktor Rost, its chief financial officer. To make matters worse, Viktor turns out to represent the interests of a dangerous criminal organization using Dazzle as a money laundering operation. Jacob finds himself the rope in a tug of war between the Russian-Ukrainian mob and FBI agents who may be working for them. Jacob decides to flee Massachusetts, an intention made possible by his now apparently vindicated Plan B. The plot is ingeniously constructed–Shapiro masterfully blurs the line that distinguishes reasonably wary preparation and the intemperate paranoia of a “survivalist.” Furthermore, the story’s taut suspense is tantalizingly immersive–the plot’s unpredictability grips the reader. Problematically, Jacob remains a touch inscrutable. It’s never entirely clear what truly is the basis of his troubled fear in the first place. Nevertheless, this is a riveting exploration of life’s uncertainty and the resourcefulness it can demand.
xx
A daring, refreshingly original drama.
xx
— Kirkus Reviews

The strength of this novel is definitely the characterization of Jacob himself. A survivalist at heart, none-the-less his self-interest is tempered by a moral compass and a sense of loyalty. As mentioned, the plot is fast moving. Although inevitably tangled in the intricacies of a situation well beyond his control, he “does his best”. (Amazon 5 stars)